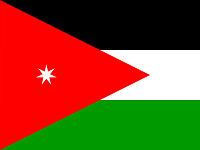 
Jordan is a country in the western part of Asia at the crossroads of Africa and Europe within the Levant region. Jordan is bordered by Saudi Arabia, Iraq, Syria, Israel, and the West Bank of Palestine. The Dead Sea is located along its western borders, and on the East Bank is the Jordan River.