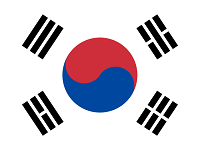 
The Korean peninsula, roughly 640 miles long and 109 miles wide at its narrowest point, is located in Northeast Asia. With Seoul as its capital city, Korea's total land area is 62,158 miles squared. Korea's neighbors include Japan to the east, China to the west, and Democratic People's Republic of Korea (North Korea) across the northern border.