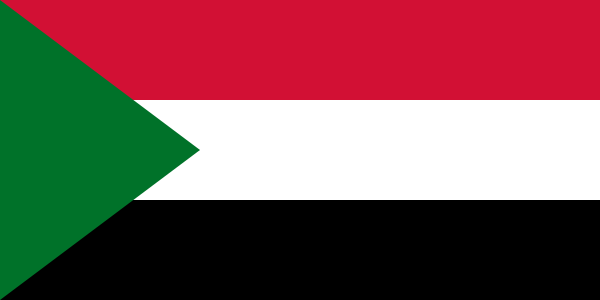 Sudan is a country in northeastern Africa. It is the largest in the African continent and the Arab World, and tenth largest in the world by area. It is bordered by Egypt to the north, the Red Sea to the northeast, Eritrea and Ethiopia to the east, Kenya and Uganda to the southeast, Democratic Republic of the Congo and the Central African Republic to the southwest, Chad to the west and Libya to the northwest. The country's name derives from "Sudd", which refers to a vast expanse of floating water plants or swamps. The earliest mention of the word "Sudd" in reference to modern Sudan appear in the writings of Seneca, who recorded an expedition sent by the Roman Emperor Nero to central Sudan in the first century A.D. Later in history, Arab writers, unaware of the origin of the word "Sudan", interpreted the term as being derived from the Arabic word "Soud", meaning "Blacks". The people of Sudan have a long history extending from antiquity, which is intertwined with the history of Egypt, with which it was united politically over several periods. Sudan's history has also been plagued by civil war stemming from ethnic, religious, and economic conflict between the mostly Muslim and Arab population to the north, and non-Arab Black Africans to the south. Sudan is currently ranked as the second-most unstable country in the world according to the Failed States Index, due to its military dictatorship and the ongoing humanitarian crisis in Darfur. However, despite its internal conflicts, Sudan has managed to achieve economic growth.

Military regimes favoring Islamic-oriented governments have dominated national politics since independence from the UK in 1956. Sudan was embroiled in two prolonged civil wars during most of the remainder of the 20th century. These conflicts were rooted in northern economic, political, and social domination of non-Muslim, non-Arab southern Sudanese. The first civil war ended in 1972, but broke out again in 1983. The second war and famine-related effects resulted in more than 2 million deaths and over 4 million people displaced over a period of two decades. Peace talks gained momentum in 2002-04 with the signing of several accords; a final Naivasha peace treaty of January 2005 granted the southern rebels autonomy for six years, after which a referendum for independence is scheduled to be held. A separate conflict that broke out in the western region of Darfur in 2003 resulted in tens of thousands of deaths and over 1 million displaced, but by early 2005, peackeeping troops had stabilized the situation.