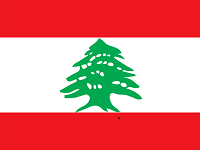 
Lebanon is a small, largely mountainous country in the Middle East, located at the eastern edge of the Mediterranean Sea. Lebanon is bordered by Syria to the north and east, and Israel to the south, with a narrow coastline along its western edge.